This article introduces the belgian brewery in Bruges, Belgium.
The process of beer brewing is similar to that of whisky.

So this is an article that can be enjoyed by all whisky lovers.

Shinno
Hello, it’s leaves hidden I of (@ Ninja_whisky).
This is a tour report of De Halve Maan brewery in Bruges.
I recommend the beer here.
Please read with a glass of beer.

One of this brewery’s beer is “Zot”.
The suspicious clown is a trademark.

Chiyoko
Then, let me introduce the tour!
The key topic is how to brew belgian beer.
スポンサーリンク

Belgian beer is fermented by adding yeast (= yeast) to malt, hops, and additives such as sugar and orange peel.

The reason for adding sugar is that it can become the food for yeast.
Yeast eats sugar and then produces alcohol.

The process of adding sugar lead to high alcohol beer.
It is the reason why belgian beer tends to be high alcohol concentration.

Some belgian bottles are added sugar when it is bottled and then it is fermented secondary in the bottle.

Shinno
I didn’t know that it was fermented in the bottle again.

High roasted one is used for brown ale.

Shinno
I asked a question to them “how to get the malt for beer”.

Brewery contracts with farms in Belgium to purchase the whole of malt for a long time.

The malt needs being germinated by brewery and then malt are used for beer.

Why are there the steps to germinate?
Yeast doesn’t eat starch. The malt needs germinating because starch changes sugar.
That is because the yeast that makes alcohol eats sugar and produces carbon dioxide and alcohol.

After heating to prevent further growth, malt is used for beer.

At this brewery, malt is sprinkled on the floor and germinated.

Shinno
It is as same as floor malting of whisky distillery.
I was surprised by it.

The hops are hardened into pellets.
This smell is like yam.
When I smell it directly, it feels like I struck my nose.

Next photo is an orange peel.
It is a characteristic of Belgian beer to add such additives.

Shinno
It is a small talk.
Germany like beer which made from only water + wheat + yeast.
On the other hand, Belgian like sweet and strong beer.
So the both cultures of beer is totally different.

Before I came to Europe, I didn’t notice this fact.

How to brew the beer

We will introduce the manufacturing equipment to brew the beer.
The facilities were huge and modern.

I couldn’t get the whole picture.

The first phase is a drying tower that heats the germinated malt and stops germination.
Drying tower is a huge facility about half of the building.
Put a malt at the entrance and let the hot air flow from the bottom to the top.

The chimney of the drying tower is a hood and is controlled so that it always faces in the opposite direction of the wind because it prevents hot air from being pushed back when facing the wind.

Chiyoko
Although it looks middle of era, the internal is high-technology.

This facility is that grinding malt.

These four containers are the facilities brewing beer.
Although it looks similar, it is divided into the following four stages.

① Stirring 80 ℃ water and crushed malt & sugar
② This is the stage of filtrating. The liquid produced in ① container includes a malt shell.
→ After this state, it is a state of sweet wheat juice.
③ Add hops this stage.
④ Yeast is added and then fermented in this container
→ Ferment for 5-6 days.

Shinno
Unfortunately,  the equipment was not in operation because this week includes national holidays.
I heard that the room was hot during operation.

Chiyoko
The tour guide told us that there is a reason that high temperature of the room. Why?
Because everyone would like to drink delicious beer after the tour.

Below is the map and pipeline structure.
The upper and lower yellow-green circles are water and the left and right black circles are beer lines.

Chiyoko
…I can’t belive it.

Shinno
There was a place where we could see the actual pipe at the brewery entrance.
Apparently it seems to be true.

Chiyoko
What is this motivation?

Shinno
They cannot build bottling pant near brewery because the brewery is in the old city.
Atmosphere of city should be kept.
Please see the photo of landscape of bruges.

Shinno
Although the production volume has increased dramatically due to the modernization of production facilities.

However, a bottling factory cannot be established to protect the landscape.

Chiyoko
By the way, here is the bottling equipment.
It was left for a tour.

Finally, it is tasting.
There is a stylish cafe where you can enjoy fresh beer.
In addition, we will introduce the tasting.

The taste is slightly orange fruity, sour, and bitter.
Compared to Japanese standard beer, it is not sharp but tastes elegant.
The belgian beer is easy to drink with blonde beer, which is fewer alcohols. 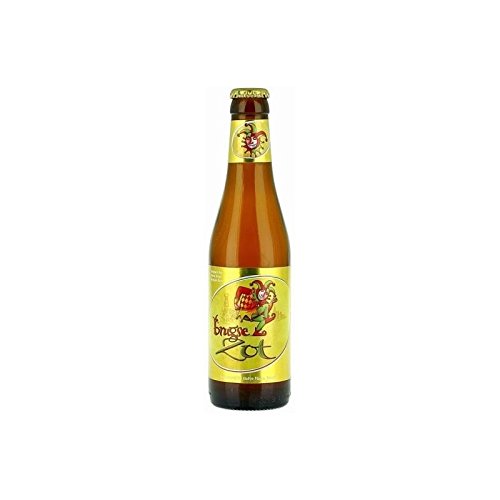 Shinno
Zot means crazy in Dutch.
The crazy clown character is impressive and hesitates to drink, but it is a cheerful image.

Another brand made at this distillery is Straffe Hendrik.
The taste is sweet and fruity.
After drinking, it has a long finish with alcohol.
As expected, the alcohol content is 9%, so it is a strong beer.

しんの
Straffe means “strong” in Dutch.
Originally, it was making a beer called just “Hendrik” that can be drunk by children because it was only 1% alcohol.

It’s delicious so I drink it occasionally, but I am knocked out after drinking strong Hendrik.

beer belgium brewery bruges
ABOUT ME